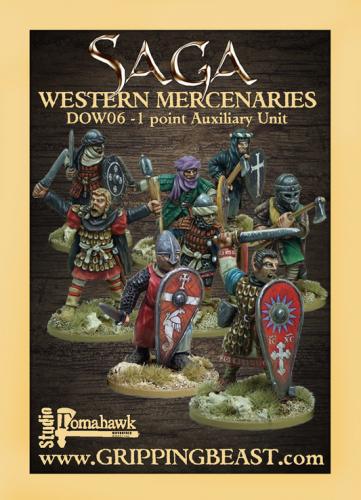 8 unscrupulous types available as Auxiliaries for most of the Christian Factions in SAGA Age of Crusades.

Supplied unpainted and unassembled but with all weapons, shields and bases.

Examples painted by Darren Linington and from the Personal Collection of Lord S.

These figures represent a rag-tag mercenary band from the period of the 1st and 2nd Crusades in Outremer. This period was very fluid in terms of dress and weapons with the Western Europeans rapidly adopting and adapting to the arms, and armour of their Eastern allies and enemies. The main access route to Outremer for the Westerners was over-land through Byzantine where the heady mix of East & West must have been an eye opener for them. Also, a large part of the Christian forces were actually made up from local Christians who would have been pretty identical to their Muslim neighbours in terms of dress.

Most knights who went on Crusade were not the grand land-owners with powerful retinues and the latest equipment but relatively poor knights with small estates or younger brothers with no real role at home, or mildly wealthy adventurers, as well as those seeking salvation, and the whole Crusades experience was financial ruin for many of them. Some would join the Military Orders, others would out hire their services out just to survive or to fund their journeys home. it is just such men that this pack depicts - skilled fighters who have adopted some of the clothes and weapons of the peoples they have fought against and alongside (Byzantines, Seljuq Turks, Arabs etc) 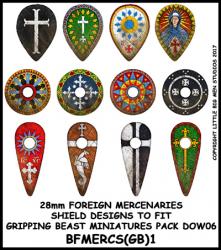