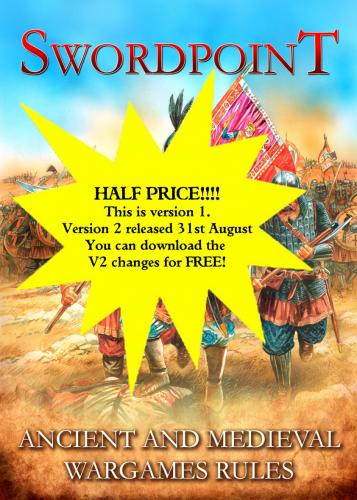 PLEASE NOTE! Version 2 of the Swordpoint Rule Book will be released 31st August 2020.
Remaining stocks of V1 will be offered at a reduced rate and you can download a document detailing all the changes in V2 for FREE HERE

SWORDPOINT is a new set of “Big Battle” game rules for fighting actions in the ancient and medieval periods. Games of SWORDPOINT involve between 100 and 250 figures per side arranged into multiple units. The game is designed to last about 2 hours and encourages the use of historical tactics and emphasises the need to maintain cohesion  in the army’s battle line, without being prescriptive. An extensive series of publications is planned and the game will enjoy the support of web downloads, living FAQ and a range of supported events.