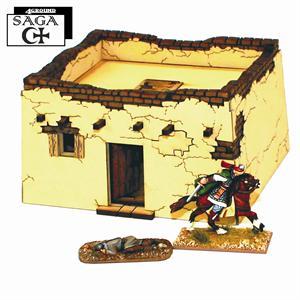 Price: £23.00 Sorry, currently not in stock!
Get notified when back in stock

28S-MET-101 is a ‘28S’ 4Ground model kit, ‘28S’ means this kit is highly detailed inside and outside with many
pre-painted parts. This simple one roomed adobe building was typical of dwellings built by both ‘Middle Eastern Arabs’ (Sharq Alawsat Arab    ) and ‘North African Arabs’ (Mugh Arib) during the middle ages.  Even today it is not uncommon to find people building such rural dwellings in North Africa or the Middle East, with almost nothing changed in the way they have looked since the early Islamic period - other than the addition of an occasional air conditioning unit or satellite dish on the roof or the walls. Sometimes called a ‘home of earthbrick’ (Dar al Tob) the bricks of their walls (Suwr) were made from a mix of straw (libbin) and earth mud (teen).  These walls then had their surfaces rendered with two or more coats of ‘teen’ to prevent weathering - more from sandstorms than rain, though this render could quickly be lost at the top leaving the adobe bricks exposed to greater erosion.  The internal ground floor was ‘earthen’ (Turaab) though the threshold could be of stone paving (hajar balaat).   Wood was often not a common local material for such buildings, a door (bab) was usually wooden but it could also be woven cane, the windows (shubak) could be cane frames or simple wood or lattice woodwork, many houses would also have wooden shutters (safaqa).  Long wooden roof joists (shandal) were so valuable they were often left extending beyond the outside of walls so they could be reused again in the future (sandblasted but still retaining their strength).   Most Arabs considered their roof area as an upper floor of their house (regularly used for sleeping), as the climate in most arab lands meant the roof could be utilised for much of the year as an open air room. To make the roof (saqf) strong enough to walk on, the joists were covered in woven cane (basjeel) then three layers of finer woven palm matting (manqrur) were placed over this, over which was then coated several layers of ‘teen’ to give a strong finished surface.

Figures by Gripping Beast not included.