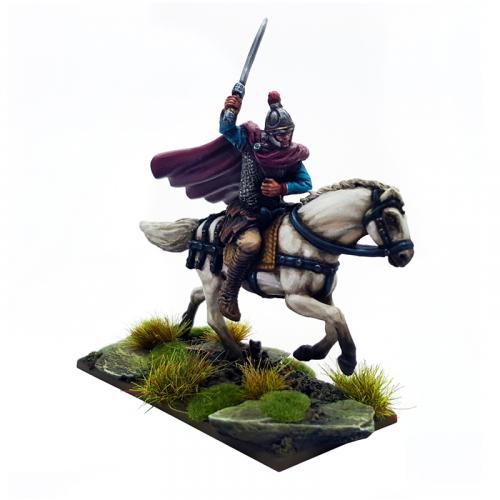 An unmissable character from the era of invasions in Britain, Arthur is a difficult character to write about. Lots of references to him exist in medieval literature, but the problem lies in the shifting through these sources, many of which were written many years after he was thought to exist.

Arthur was probably a mix of different historical characters, he may have been Ambrosius Aurelianus, hero of Badon Hill, or Riothamus, King of Britons, who went to Gaul to fight the Visigoths, or even Owan Ddantgwn, a lord from North Wales... the lies goes on. There is an almost infinite number of text in which Arthur makes an appearance. Where does myth stop and history begin?

We have decided to represent Arthur as a successful warlord, inheritor of Roman traditions. His charisma and courage allowed him to assemble the best warriors that he forged into an extremely mobile force made up of numerous units of cavalry.