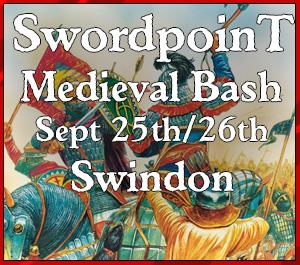 Price: £20.00 Sorry, currently not in stock!
Get notified when back in stock

Book your place at this fun Swordpoint Event!

The event will take place on 25th/26th September 2021 at Moredon Community Centre, 1 The Street, Swindon SN25 3ER. Should it prove impossible to do so due to the Coronavirus Pandemic, all entry fees will be refunded.

In the event that unforeseen government or local authority regulations limit the number of attendees to less than the number of tickets sold, a lottery will be held to determine attendees and the remainder offered free entry to a later event, or a refund or other compensation of equivalent value at their request.

Armies will total 1250 points and should be taken from the Medieval Armies book or the Genghis Khan supplement, plus the following from the Dark Ages book:

In each case these armies may not field options noted as available only before 1066 AD. Armies designated on page 38 of the rulebook as able to employ Torsion Artillery may do so since many Medieval armies have access to gunpowder artillery.

The event will be run using Version 2 of the Swordpoint Rulebook (available soon!)

Please Note - No physical ticket will be issued but you will be emailed a conformation of your booking and will be added to the mailing list for all details of the tournament as they are announced!

In a fit of efficiency, the Player's Pack is now available HERE